“He entered the synagogue and for three months spoke out boldly, and argued persuasively about the kingdom of God. When some stubbornly refused to believe and spoke evil of the Way before the congregation, he left them, taking the disciples with him, and argued daily in the lecture hall of Tyrannus.” (Acts 19:8-9)

“Jesus is not saying, “Make sure you pray a prayer of repentance, start going to church, and wait for Me to come back.” He is saying, “You can live a radically different life because there’s a new world order that just broke in, so stop walking in the direction you’re going, turn 180 degrees, and walk toward Me and life in the kingdom of God.” - Halter, Hugh. Flesh: Bringing the Incarnation Down to Earth, David C. Cook, p. 53. 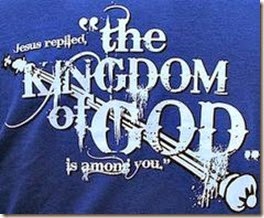 When Luke wrote his gospel and the book of the Acts of the Apostles, the reader of both will observe that Luke had clear objectives in writing each. First, in the Luke’s gospel, Luke gives witness to the work and person of Jesus Christ, as the Son of the Living God. Then, after Jesus’ ascension, Luke begins to tell us of the work of the early church in Acts, but not just the story of the church, but he gives witness to the work and person of the Holy Spirit to proclaim, spread and invite others to enter and receive the kingdom of God. Luke begins by stating, “In the first book, Theophilus, I wrote about all that Jesus did and taught from the beginning until the day when he was taken up to heaven, after giving instructions through the Holy Spirit to the apostles whom he had chosen.” (Acts 1:1-2) Luke tells us how the Holy Spirit worked through the early church and apostles to change and transform their world and bring others into the kingdom of God.

The original apostles, as well as Paul, did not use the term kingdom of God as often as Jesus used it, but not because it was not important to their proclamation of the good news. Luke in his gospel, had Jesus using the phrase, “kingdom of God,” thirty-one times, then in Acts, the phrase is used on six occasions. They did understand and believe in the kingdom of God Jesus taught them, for the apostles and the early church they understood that they were currently living in the kingdom as their present and current reality. They would speak of the kingdom coming to completion at the end times when Jesus returned, but the kingdom currently existed, in part within the community, the body of Christ, but it did not end with the church, they proclaimed it and called to others to follow the “Way” within the context of their known world.

The use of the phrase, “kingdom of God,” may not be as numerous as Jesus, but they were not deserting Jesus’ concern for the kingdom of God. They were simply expressing the same idea in their own way and spoke of the essential elements that were experienced when one lived in the kingdom. They expressed the kingdom as, God graciously giving salvation as a free gift of grace (extending His kingdom) to anyone who will receive it (enter the kingdom) through His Son Jesus Christ, and this salvation begins now (the kingdom is in the midst of you) and will be completed in the future (the kingdom will come like a thief in the night). As Paul put it, “the kingdom of God is righteousness and peace and joy in the Holy Spirit.” (Rom. 14:17).

In our scripture reading today, Paul meets individuals who knew of the baptism offered by John the Baptist for the repentance of sins, but did not know of the baptism of the Holy Spirit, which he freely shared. Paul goes on to share the good news, “He entered the synagogue and for three months spoke out boldly, and argued persuasively about the kingdom of God.” (Acts 19:8) In verse 9, Luke makes mention of those who rejected “the Way,” which was an early designation for disciples of Jesus Christ. The Way was about a direction of life, a life away from sin, (repentance) to the way of life (toward Jesus and the kingdom of God). For us to enter and receive the kingdom of God, we first need to change our direction and transform our lives.

We often miss the righteousness, peace and joy in the Holy Spirit that Paul speaks about when we concentrate our attention, chiefly on areas, like, salvation, eternal life, forgiveness, grace, etc. as primarily as a means to get us to heaven, rather than a means to enter the kingdom. Heaven is not the goal of the Christian life, it is the glorious and ultimate destination for the faithful, but it is not their goal. Our goal is to enter and receive the kingdom of God as it applies to the here and now in the way we live our lives as a disciple of Christ, today in the place and time God has place us. When we speak of salvation we should be speaking of the kingdom, and when we speak of forgiveness we should be speaking of the kingdom. The kingdom exists today in the lives we live out in Christ and it will come to its glorious completion sometime in the future.

“It is easily forgotten that the fellowship of Christian brethren is a gift of grace, a gift of the Kingdom of God that any day may be taken from us, that the time that still separates us from utter loneliness may be brief indeed. Therefore, let him who until now has had the privilege of living a common Christian life with other Christians praise God’s grace from the bottom of his heart. Let him thank God on his knees and declare: It is grace, nothing but grace, that we are allowed to live in community with Christian brethren.” - Dietrich Bonhoeffer, Life Together

Through the body of Christ, the church, we only see a partial glimpse of the kingdom of God, of course, it should exist in the church and we should work to strengthen its presence. The kingdom exists wherever God’s people are sharing hope, faith and love in a world filled with people who are living in darkness and lack hope. The kingdom exists wherever Jesus’ disciples are inviting others to join us in the kingdom, in the streets, among the poor, among the sick and hopeless, wherever the broken people of God need someone to give them respect, compassion, hope, healing, and love.