Christianity is not a religion that gives some people a ticket to heaven and makes them judgmental of all others. Rather, it’s a call to a relationship that changes all other relationships. Jesus told us a new relationship with God also brings us into a new relationship with our neighbor, especially with the most vulnerable of this world, and even with our enemies. But we don’t always hear that from the churches. This call to love our neighbor is the foundation for reestablishing and reclaiming the common good. Which is fallen into cultural and political - and even religious-neglect. - Jim Wallis, “On God’s Side: What Religion Forgets and Politics Hasn’t Learned about Serving the Common Good”, Brazon Press, 2013, pp. 3-4. 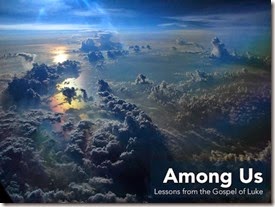 We often don't recognize the moral crisis and spiritual conflict of our age, until something "shakes us up" to the reality of our present condition. The Chinese character for signifying the idea of “crisis” combines two other characters, the one for “danger” and the other for “opportunity.” Crisis is made of both, and so too is the current situation of the church. Dangers lurk on all sides for churches, but probably the greatest dangers lies within. Dangers lurk for us because we may be looking in the wrong places. We expect God to do something very specific for us so we can live comfortably as the church, but God is at work in another part of our community and we miss the opportunity to join God as God’s partner.

The Pharisee’s expected the Messiah to bring the kingdom or reign of God with a great deal of flashily drama and the mighty arm of God who would crush their enemies and establish His rule forever. Jesus was not what they expected and they failed to see the kingdom in their midst, because they were looking for something else.

The reward for doing what is right and just and the penalty for sin and wrong-doing are not always experienced in this life. Scripture assures us that someday the day of the Lord and the final judgment will come. Though at the present, Jesus tells us that there will be persecution, suffering, and difficulties in this age until he comes again at the end of the world. God extends grace and mercy to all who will heed his call. Do we take advantage of this grace and mercy to seek God's kingdom and to pursue his will?

Jesus used parables to describe the Kingdom in part because you simply can’t give a definition of the Kingdom. The kingdom of God defies any definitive definition, but you come realize you are living within it in the presence of Jesus, in the presence of other disciples and you recognize you have come near to it. Hopefully, we have all had the experience of feeling we are in a special place, a place where the kingdom has come near. A place where we feel joy in the fellowship of others, we experience the power of the compassion, love, and support shared with us, the facility, the restrooms, and the coffee might not be very good, but the people are a treasure and to leave seems so hard to do.

In Luke 10 when Jesus sends out the 70, he tells them that others will know the Kingdom of God has come near to them when they accept the peace they offer in the homes they visit and others would reject them, but they have missed something special, they will know the Kingdom had come near to them, but no longer. The kingdom of God is among you could refer to Jesus himself. He was the very embodiment of the kingdom and many did not recognize him. It is as if Jesus said, “The whole offer and secret of God is standing here before you do not see it.”

The central aspect of the teaching of Jesus was that concerning the kingdom of God. Jesus appeared as one who proclaimed the kingdom; all else in his message and ministry serves as a function in relation to that proclamation and derives its meaning from it. The challenge to discipleship, the ethical teaching, the disputes about oral tradition or ceremonial law, even the pronouncement of forgiveness of sins and the welcoming of the outcast in the name of God - all these are to be understood in the context of the kingdom of God proclamation or they can not to be understood at all.

As Jim Wallis reminds us in our opening quote: “A call to live in the Kingdom is a call to a relationship that changes all other relationships.” How can you tell when you are experiencing the kingdom of God? The kingdom of God is already among you. Pray for the grace to recognize God's presence throughout this wonderful day the Lord has given you.